I am sorry if this blog post is long, but so much has happened since my last post. First I want to give my readers a update on the past year. As many of you know, my wife was injured in a serious auto accident on September 19th. She was traveling on a four lane divided highway and a pick up truck traveling in the opposite direction lost control and hit a auto hauler. The driver then went through the grassy median and hit my wife head on at a high rate of speed. She suffered serious and painful injuries.

Since that day, I have learned first hand what it is like to deal with an insurance company. The man that hit my wife, Mr. Holloway did not call, e mail or mail an apology. Ok, so Mr. Holloway has insurance with Nationwide. I have spoken with the Nationwide claims adjustor many times, e mailed and written to him. As of today, January 13th, 2006 Nationwide Insurance has paid nothing on our loss. So much for all the television commercials.

Due to my wife's injuries, we had no choice but to delay the fall 2005 coaching class. The next class will start on January 17th. My wife normally handles the admissions for the coaching program as well as the tuition payments. Since she was not able to follow up with the students, it was necessary to cancel the class. I am sorry to all the students who were not able to attend the October class due to her injuries.

While giving public speeches many years ago, I started what I call my top ten best and worst customer service stories of the year. This has somewhat grown into a tradition. It really just started out as cocktail conversation when I visited with guests at the resort. This has grown very popular now that I am teaching the 52 week business coaching program.

Since my wife's accident I missed writing my November, December and January article for 400 Edition. I have fallen behind in writing my weekly coaching column. So for all my friends who regularly visit my blog, here is a list of just the top winners and losers. I won't go into detail here for the top winners, but I will briefly list the reasons for the top losers.

Wolf Camera and Video - No doubt, they win the award. David Ritz, CEO / President of Ritz/Wolf Camera should be ashamed of how his company reacted and responded to a customer complaint.

Publix Supermarket - Gainesville Georgia ( Thompson Bridge Rd.) Big disappointment for such a well run company. Manager made poor choices in customer relations and even after having several opportunities to correct the problem, lost a customer for the cost of 2 roasted chickens. ( Read my next blog, the follow up to publix)

IHOP - Julia Stewart, the CEO of IHOP does not follow through. Talk about using a form letter to respond to a customer. I don't think she reads her mail, she just sends the standard complaint letter out. IHOP management needs to wake up.

Eckerd Drugstores in Georgia.- District manager does not return phone calls. How can you complain if you call them and they don't call you back.

General Motors / On Star - Talk about getting the run around. When my wife's air bag went off in her Suburban, the On Star unit did not work. She tried and tried pushing the red emergency button, but no luck. It did not work. This is after we paid $16.95 a month for On Star service. I complained and complained. Talk about run-around. Bottom line, the product allegations department got involved, they came back with, " there is nothing we can do" if you don't like it, hire an attorney and file a law-suit. I think Rick Wagner Jr., CEO of GM, needs to take a good look at why GM is doing so poor.

I have several projects planned for 2006, including a video production for the coaching trade. I am writing a book, a novel of sorts, but this is more for fun than anything else. All of these things are on hold until my wife heals and returns to her daily life.

On the bright side, I recently took a trip to Florida to visit my father. On the way down I was thinking about how the local school district handles disruptive children. My daughters come home with stories at night and all I can think about is how much using a coaching approach would benefit young children. Similar to Dr. Glasser of the Glasser Institute. He uses a positive approach to teaching.

So there I am, on the way down I-75 when I look out my window and there is this boy putting his head out the window. I was in South Georgia and due to construction the traffic was moving very slow. So I decided to using my coaching techniques on him. He was just having fun, not hurting anyone, but I could see how some drivers who are stressed and aggravated with the traffic could take it out on this boy.

So when I was along side of him, he was acting silly, so I pulled out my digital camera and snapped a picture. I think it stunned him. He shifted gears, instead of aggravating me, I think I aggravated him. A few miles down the road, I unrolled my window and asked him and his mom for their e mail address, I was going to send the picture to him. He was shocked and skeptical about giving out his e mail address. So true to my word, I am posting it on this blog. I hope it shows up on your screen. His name is DJ.

So DJ, this one is for you. ( Sorry for the delay) 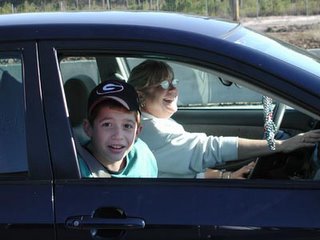